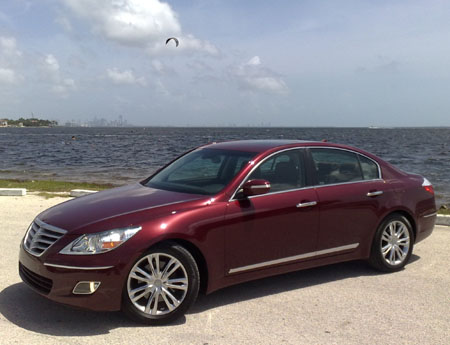 Dictionary.com defines the word “Genesis” as a coming into being, an origin or a creation.
Hyundai defines Genesis as “a vehicle crafted to rival the world’s premier sport sedans.”
I define Genesis as the next big thing. Get ready because you are going to be seeing a lot of these cars on the road soon.
Hyundai has basically taken the design elements of the world’s leading luxury sport sedans and combined that with performance parameters of the top rear-wheel-drive models on the road today and developed “Genesis” – a new beginning for the Korean automaker.
Genesis is offered in two models, defined by the engine that powers each. The Genesis 4.6 features the all-new Tau V-8 powerplant – the first in North America from the automaker – and the Genesis 3.8 utilizes a next-generation Lambda 3.8-liter V-6. Each are mated to their own six-speed automatic transmission with sport shift, the former harnessed to the same ZF sport gearbox used by Jaguar in their sport models.
Zipping around the upscale suburbs of Miami on a recent press jaunt, we learned the new Genesis is more than just another pretty face. Hyundai has done its homework and Genesis is the real deal. And it is a real Hyundai, meaning it is a great value with a great warranty backing it up.
While Genesis is competitively priced against its performance benchmarks (Chrysler 300C and Pontiac G8 GT), in pure style and content it blows away pricing comparison with its image set models that include Infiniti M, Mercedes-Benz E-Class and BMW 5-Series.
Style with substance – and a killer price.
It appears in waiting to deliver a vehicle in this category has paid off for the automaker as designers and engineers had the benefit of seeing all the competition from East to West had to offer and were able to glean (emulate, complement, illustrate, interpret – OK, copy) the very best at an incredible value.
Genesis highlights include:
Electronic active front head restraints
Electronic stability control
Eight airbags
Heated front seats
Cooled driver’s seat
Adaptive Front Lighting system with HID headlamps with adaptive leveling
Proximity entry with electric push-button start
Navigation with backup camera
Bluetooth technology
IPod/USB auxiliary inputs
HD and XM Satellite radios (with NavTraffic)
Lexicon surround audio system with 6-disc DVD changer
Automatic windshield defogger with humidity sensor
Rain-sensing wipers
Five-link front and rear suspension with damping control
Tau V-8 engine (375hp/333 lb. ft. torque)
Six-speed automatic transmission with manual sport shift.
Genesis 3.8 models ride on 17-inch wheels and tires while 4.6 models get 18s and all Genesis sedans feature four-wheel disc brakes with ABS, brake assist and electronic brakeforce distribution.
Fuel economy figures for the 3.8 run 19 mpg city and 27 mpg highway while 4.6s should deliver 17 mpg city and 25 mpg highway.
Pricing for the 2009 Hyundai Genesis 3.8 (V-6) models begins at $33,000 and 4.6 (V-8) models start at 38 grand. Hyundai predicts Genesis sales to be around 80 percent V-6 models and 20 percent V-8s.
Genesis is the next big thing for Hyundai but, as the name suggests, is only the beginning of big things to come.