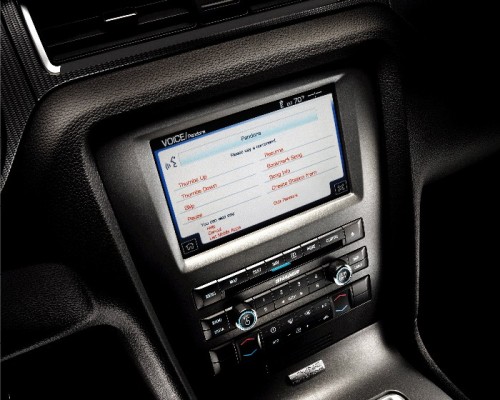 Put on a fresh pot of coffee, round two of the CES Garage has arrived and Las Vegas has been hopping.

General Motors and Powermat, a pioneer in wireless charging technology, announced a commercial agreement today that will eliminate the need for charging cords for personal electronic devices in many future Chevrolet, Buick, GMC and Cadillac products beginning mid-2012.

FUJITSU TEN LIMITED is currently developing next-generation vehicle-mounted devices under the three general themes of “linking cars with society”, “linking  cars with people”, and “linking cars with other cars, and cars with infrastructure”. One project is the development of a vehicle-mounted Android (equipped with the sophisticated NVIDIA Tegra mobile superchip) terminal. They will feature a demonstration of this prototype, which uses the Android platform, showing how simple and easy it is to use its applications that include navigation (Zenrin DataCom “Its-mo Navi”) and media player (YouTube-compatible Flash player) functions. The media player operates using Android 2.2.

Ford will launch SYNC AppLink next as a factory-installed feature for the 2012 Ford Mustang. AppLink is the free software program that gives SYNC users voice control of apps stored on their smartphone. Mustang will be the first vehicle that will offer AppLink with the standard SYNC interface, as well as be integrated into the optional Voice-Activated Navigation System, providing the additional convenience of an 8-inch touch screen for control. Just a few weeks ago, Ford went live with AppLink as a download on www.syncmyride.com, available exclusively to 2011 Ford Fiesta owners for popular mobile apps, including Pandora internet radio, Stitcher news radio and OpenBeak.

Related to this, Nuance Communications, Inc. announced that its voice technology powering the innovative Ford SYNC system is available as part of the Ford SYNC AppLink SDK. Now, any third-party developer can create a Nuance-powered voice user interface for any smartphone application developed for use by SYNC – unleashing a new ecosystem of applications that enable a safer, smarter driving experience. Ford’s SYNC AppLink software allows for hands-free voice control of popular smartphone applications for iOS, Android and BlackBerry via Ford SYNC.

Audiovox Corporation has begun shipping its new and innovative CarLink smartphone interface module.  The system lets your smartphone communicate with your automobile from virtually anywhere.  The new CarLink system enables users to control remote start and keyless entry features with two-way notification and comes equipped with a find feature to locate automobiles in crowded parking areas.  The system connects through the Audiovox Telematics Data port found on over 90 percent of Audiovox branded security systems, including Code Alarm, Prestige and Pursuit.

Audiovox also announced that it is expanding its focus on mobile safety to include solutions for distracted driving, which is becoming epidemic throughout the country. This new system has been developed for the automotive aftermarket where Audiovox is already an industry leader in entertainment, security and more recently safety. It is an expansion of their collision avoidance camera and sensor programs that have been supplying the aftermarket for the last several years.  These new systems will give all consumers features currently only available on premium new cars. The driver assistance alert system has two major functions: unintended lane departure warning (LDW) and forward collision warning (FCW).  It will provide an audible warning to the driver if they cross over the lane markings without engaging their turn signal. It also warns the driver if they are following too close to the vehicle in front of them, or if their closing speed in relation to the car in front is likely to cause a collision.  It pays attention even when the driver doesn’t! The system uses advanced OEM grade “Machine Vision” technology that can identify the road lane markings as well as vehicles and stopped objects in your path. For FCW, it utilizes an on board computer that calculates the time-to-closing distance of objects in front of you. For LDW, the computer calculates the lane position of your vehicle in relation to the lane markings, or roadside edge if there are no markings.

And if that were not enough to keep them busy in Vegas, Audiovox Corporation also announced the introduction of the industry’s first automotive Blu-ray Disc player that plays any Blu-ray Discs as well as traditi
onal DVDs and CD Audio Discs.

Hyundai is set to challenge conventional wisdom in the automotive industry again in 2011 with the introduction of Blue Link, an all-new telematics platform exclusive to Hyundai models. This new telematics platform will offer more than 30 unique connectivity features on future models. A variety of different features will be available at launch, including unique applications such as a maintenance alert that helps drivers identify and schedule service; an “Eco-Coach” that improves efficient driving; restaurant ratings; and remote door lock/unlock capabilities. Blue Link’s innovative features continue with remote vehicle start, which allows a driver to heat or cool the car before driving; geofence, which can send a text if a driver has ventured outside prescribed borders or time constraints; and stolen vehicle slowdown to help police recover a stolen vehicle.

In addition to the new stand-alone service they are going to be offering, OnStar unveiled a demonstration of prototype applications for what future in-vehicle entertainment, communications and safety could look like when taking advantage of the Verizon Wireless 4G LTE Mobile Broadband network.

OnStar has equipped a Buick LaCrosse research vehicle to show these applications in the Verizon Wireless booth at the show. Any future streaming video capabilities would be either available solely in the rear seat of the vehicle or only when the vehicle is in park. Among the innovative services made possible by combining the power of OnStar with the speed of 4G:

1.     Vehicle monitoring. Cameras mounted throughout the interior and exterior of the car allow remote viewing of what is happening in and around your parked vehicle through a smartphone or PC.

2.     Impact detection. The research vehicle has the ability to send live video to secure servers in the cloud from each of its six cameras placed around the exterior and interior of the vehicle. This is triggered by events around the car, or by an application on a smartphone. When an impact such as a parking lot fender-bender is detected, the vehicle transmits a video clip – helping to identify the offending driver.

3.     Home monitoring and control. Keep an eye on your home by connecting to security cameras in real time through the 4Home service. Control the thermostat, lights and other home systems from your vehicle – “preset” scenes allow you to condition your home when you leave, before you return, or when you’re leaving for an extended period of time.

4.     Electronic User’s Guide. Learn how to operate and maintain your vehicle through videos streamed on demand to the dashboard.

5.     Video chat. Make a video call using Skype to connect with family, friends or colleagues when the vehicle is in park.

Traffic view. A voice-operated navigation system goes beyond calculating the best route by displaying live traffic-cam images from TrafficLand to spot congestion before you get stuck in a back-up.

To provide smart connectivity solutions in vehicles while addressing the growing need to minimize driver distraction, Visteon Corporation has developed a range of electronics products, services and applications designed specifically for the automotive market from a driver-centric perspective. At CES 2011, Visteon is showcasing a range of smart phone applications that support connectivity solutions. Examples include applications that convert a mobile phone to a remote device for music apps like Internet radio and traffic apps such as Visteon’s own TrafficJamCam. Available for purchase on the iTunes online store, TrafficJamCam lets users see current traffic conditions on highways and other major roadways of their choosing, faster and more accurately than typical radio updates or other traffic reports. This allows them to plan or change their driving routes based on current traffic or road conditions.

NAVTEQ, the leading global provider of maps, traffic and location data enabling navigation, location-based services and mobile advertising around the world, will provide demonstrations of a beta navigation application, iGO My way. Created by NNG (formerly Nav N Go), the iGO My way application utilizes NAVTEQ Natural Guidance content to generate directions the way a friend does, rather than linear instructions.

Want to keep tabs on your teen-aged driver? Or know how many miles your electric car can drive in mountain terrain? NAVTEQ has those answers—and more.

The demonstration apps show how drivers benefit when cars are connected to onboard applications which are connected to offboard services.  NAVTEQ is providing the content to transform the driving experience to help its customers do the same.

Teen Driver Application. This demo app provides teens—and their parents—with insights into how, how fast, and where teen drivers are driving. A configurable geo-fence tracks whether teen drivers are within a defined range or area (e.g. within five miles of their house), provides real-time coaching on how they’re driving, and even grades their overall performance.  “It’s a terrific tool because it heightens awareness about how kids are driving,” said John MacLeod, Executive Vice President of NAVTEQ Connected Services. “It provides objective feedback that spurs productive dialogue between parents and kids, so kids learn to drive smarter.”

Electric Vehicle Application. This electric vehicle demo app uses NAVTEQ’s advanced vehicle map attributes to estimate the vehicle’s driving range in less-than-flat terrain, city versus highway driving, or driving in heavy traffic. “These are among the key variables that can seriously impact an electric car’s range which vary appreciably,” said MacLeod. The app uses road slope, vehicle speed, real-time traffic, and the likelihood of a car needing to stop (at stop signs, street lights, in heavy traffic, etc.) to determine range and goes on to guide drivers to nearby charging stations.

And finally (today) Consumer Reports has identified the following five product areas that will have an impact this year on consumers.

1.&nbs
p;    TABLET COMPUTERS – Though other tablets started to appear in the marketplace toward the end of 2010, most were disappointing compared with the Apple iPad. Consumer Reports expects that the iPad will get some real competition from tablets introduced this year at the show. For example, the Toshiba Tablet will offer many features that the current iPad doesn’t, including a camera, a memory-card slot, and support for Flash video.

2.     PASSIVE TECHNOLOGY FOR 3D TV – Another one of Consumer Reports’ anticipated product categories is 3D TVs made for viewing with light, inexpensive passive glasses, as opposed to the bulky and costly active-shutter glasses they’ve needed until now. Vizio, LG, and other manufacturers will be showing these TVs.

3.     NEW COLOR TECHNOLOGY FOR E-BOOK READERS – Though e-readers—which played a large role at last year’s CES—probably won’t be as thick on the ground this year, we’re interested to see the latest versions of e-book readers that use technologies, such as Mirasol, that will eat up less battery power than existing color LCD e-book readers.

4.     4G PHONES – Consumer Reports expects that Verizon, along with other carriers and manufacturers, will announce many new 4G phones, using faster networks than most current cell phones use. Sprint and HTC announced the EVO Shift 4G and Samsung is expected to announce a 4G phone.

5.     CAR CONNECTIVITY – Consumer Reports will also be looking at innovative car connectivity solutions, including ones that implement 4G, from manufacturers such as Ford and Audi.