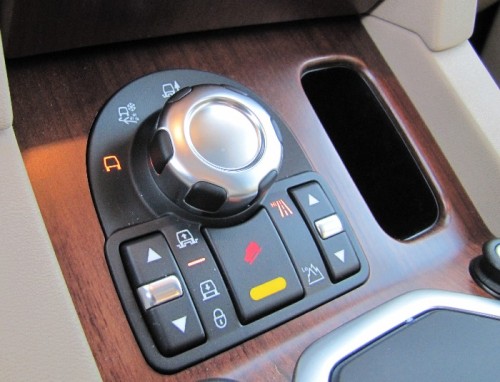 DNA testing of the new Land Rover LR4 would reveal that there is still a good bit of Big Blue Oval pulsing through its veins. The brand’s latest mid-size SUV may receive corporate mail from an Indian postmark but development of the LR4 in current form began back when Dearborn, Michigan was a frequent destination for Land Rover hierarchy.

The new LR4, as with its predecessor LR3, is a US-market designation. The platform is known globally (and previously here) as the Discovery Series, or Disco for short. And thanks to Ford, Disco is not dead! (Sorry, I have been waiting years to work that into an article.)

Yes, the new LR4 with its all-new powertrain and interior and chassis refinements is the most stunning and powerful midsizer for the brand yet. At the heart of the vehicle is another application of the great new 5.0-liter V-8 engine whose siblings are found in the likes of Mustang GT, Ford F-150 and even the new Jaguar XJL we tested recently.

For LR4 the five-point-OH cranks out 375hp and 375 lb. ft. of torque, enough to more than get this big box out of its own way. Mated to a slick six-speed automatic gearbox with CommandShift technology the new Rover offers very spirited driving especially in sport mode. No, this ride won’t be turning laps at Laguna Seca but perhaps hold its own a bit south of there at Baja.

While offering a most enjoyable and comfortable onroad experience, Land Rover vehicles live for the moment the pavement ends. This Rover, like its stablemates, features the Terrain Response System where the driver simply points the arrow on a knob in the center console to a symbol that looks like what is under the tires and it’s go time.

No matter what harsh elements are being experienced outside the interior of the LR4 bathes its occupants in luxury and comfort along with the latest technology. An awesome audio system complements a most capable navigation unit and the indash display can be set to show the vehicles offroad status at all times. Blind spot issues found in most SUVs are taken care of thanks to rearview camera (with optional 360-degree camera sight around the vehicle available) and rear park distance control.

Land Rover styling is truly unique and quite apparent in the LR4. While some may find its overly-boxy dimensions a bit polarizing the Discovery (LR) series has found quite a few fans globally.

OK, fuel economy is the biggest complaint in this rig as 12 mpg city and 17 mpg highway (on good days) as rather appalling for this segment especially given the new powertrain and what it offers in other applications but pushing a large refrigerator box down the road is not going to win any coefficient-of-drag competitions.

Driving the new Land Rover LR4 certainly proves that ‘Disco’ is not dead.